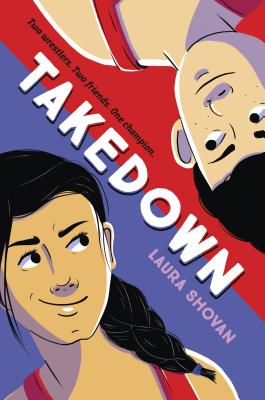 Mikayla is a wrestler; when you grow up in a house full of brothers who wrestle, it's inevitable. It's also a way to stay connected to her oldest brother, Evan, who moved in with their dad. Some people object to having a girl on the team. But that's not stopping Mikayla. She's determined to work harder than ever, and win.

Mikayla and Lev work hard together and become friends. But when they face each other, only one of them can win.

"A kick-out story about family, friendship, and wrestling down stereotypes. Mikayla Delgado rocks!" --Wendelin Van Draanen, author of Flipped, the Sammy Keyes series, and The Secret Life of Lincoln Jones

"Kids struggle every day with the dynamics of high expectations, performance standards, and social relationships. Takedown is a great example of how the sport of wrestling can help everyone involved conquer these challenges and appreciate some of life's most valuable lessons." --Kyle Snyder, Olympic wrestling gold medalist

“Sure to inspire the poet in all of us, young and old.” —Mark Goldblatt, author of Twerp

Laura Shovan's debut middle-grade novel, The Last Fifth Grade of Emerson Elementary, was a NCTE 2017 Notable Verse Novel and a Bank Street College of Education Best Children's Book of the Year, and won a Cybils Award for poetry, as well a Nerdy Book Club award. Her son's experiences as a member of a travel wrestling team were the inspiration for Takedown. Laura and her family live in Maryland, where she is a longtime poet-in-the-schools for the Maryland State Arts Council. Visit her online at laurashovan.com, or follow her on on Facebook and on Twitter at @LauraShovan.
Loading...
or
Not Currently Available for Direct Purchase