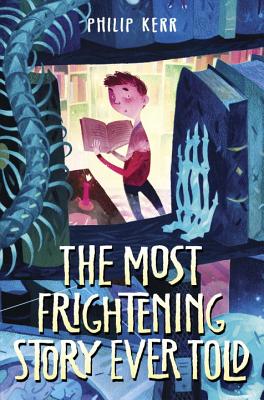 The Most Frightening Story Ever Told

Roald Dahl meets R. L. Stine in this spine-tingling and hilarious tale from a bestselling author!

Billy Shivers doesn’t have a lot of excitement in his life. He prefers to spend his days reading alone in the Hitchcock Public Library. So it is a bit out of character when he finds himself drawn to the Haunted House of Books, and a competition daring readers to survive an entire night spent inside.

The Haunted House of Books is a cross between a bookstore and a booby trap. It’s a creaky old mansion full of dark hallways and things that go bump in the night, and the store’s ill-tempered owner, Mr. Rapscallion, only adds to the mystery.

But the frights of the store itself are nothing compared to the stories it holds. These stories are so ghastly, so terrifying, so shocking that once you’ve read them, you’ll never be the same.

“Not for the faint of heart, oscillating between spooky and mysterious, this will appeal to readers looking for a fright.” —School Library Journal

Philip Kerr is the award-winning author of more than twenty books, including the young adult novel The Winter Horses. In 2009, he won the British Crime Writers’ Association Ellis Peters Historical Award and Spain’s RBA International Prize for Crime Writing for his New York Times bestselling Bernie Gunther series. A former advertising copywriter who released his first book in 1989 and in 1993 was named one of Granta magazine’s “Best of Young British Novelists,” he now divides his time between London and Cornwall. Learn more about Philip and his books at PhilipKerr.com.
Loading...
or
Not Currently Available for Direct Purchase