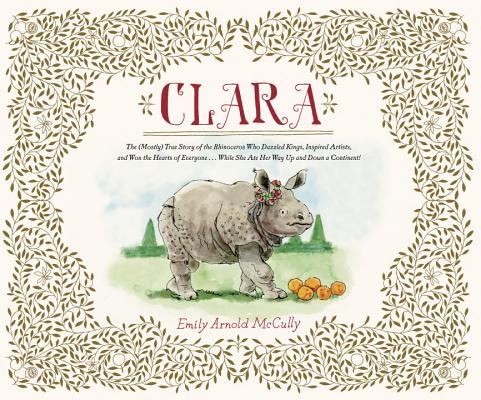 The (Mostly) True Story of the Rhinoceros who Dazzled Kings, Inspired Artists, and Won the Hearts of Everyone...While She Ate Her Way Up and Down a Continent

This fascinating, informative, and touching picture book by a Caldecott Medalist is based on the true story of an eighteenth-century rhino who toured Europe and started a sensation! Clara is a book sure to fascinate young animal lovers, history buffs in the making, and kids interested in geography, as they follow a rhinoceros on her journey across Europe.

In detailed illustrations, McCully shows Clara being introduced to Louis XV of France, Frederick the Great of Germany, and others willing to pay for a chance to stroke her soft lip. Her owner, a Dutch sea captain, keeps Clara fed (she eats 100 pounds of hay and 30 loaves of bread a day!) and watered (she drinks 14 buckets of water and beer) and takes loving care of her until her death 17 years later.

Praise For Clara: The (Mostly) True Story of the Rhinoceros who Dazzled Kings, Inspired Artists, and Won the Hearts of Everyone...While She Ate Her Way Up and Down a Continent…

Emily Arnold McCully has written and illustrated many highly acclaimed picture books, including the Caldecott Medal winner Mirette on the High Wire. She is also the author of the young adult biography Ida M. Tarbell: The Woman Who Challenged Big Business—and Won!, which was a Washington Post Best Children’s Book of the Year and a finalist for the YALSA-ALA Best Nonfiction Book of the Year. She lives in New York City. Learn more at emilyarnoldmccully.com.
Loading...
or
Not Currently Available for Direct Purchase