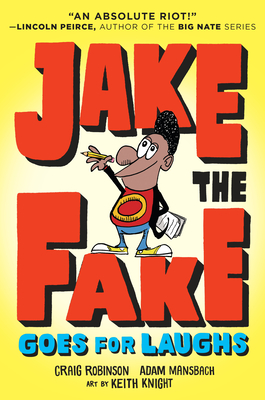 Craig Robinson is an actor, comedian, and musician best known for his work in such films as Hot Tub Time Machine, Morris from America, This Is the End, and Pineapple Express and for his role on NBC's The Office and as the host of Caraoke Showdown. But he has not let the fame go to his head like Jake. When he's not filming, Craig might be playing the keyboards with his band Craig Robinson and the Nasty Delicious. Craig lives in Los Angeles and performs worldwide as a stand-up comedian just like Jake (sort of). Discover him on Twitter at @MrCraigRobinson.

Adam Mansbach would never let fame go to his head, even though he is the #1 New York Times bestselling author of a picture book about kids but really for adults. This well-known work--whose title cannot be named here--has been translated into over forty languages and was Time Magazine's "Thing of the Year." Adam's other books have garnered such acclaim as the California Book Award and are taught in hundreds of colleges and universities across the country. He has also written a middle-grade novel about a boy who trades letters with Benjamin Franklin through time, and the screenplay for Barry, a biopic about Barack Obama's life as a college student. His work has appeared in the New Yorker, the New York Times, and Esquire, and on NPR's All Things Considered. Adam lives in Berkeley, California, and has two daughters whose jokes could compete with Jake's. Find Adam on Twitter at @adammansbach.

Keith Knight is the acclaimed recipient of the NAACP History Maker award. He is the creator of the award-winning comics The Knight Life, (th)ink, and The K Chronicles. His art has appeared in numerous publications, including the Washington Post, Daily KOS, San Francisco Chronicle, Salon.com, Ebony, ESPN the Magazine, L.A. Weekly, MAD Magazine, and The Funny Times. Jake thinks this is pretty cool--even though he's a comedian, he can't draw at all. Keith lives with his wife and two boys in Carrboro, North Carolina, where they cheer on the Red Sox and dream of one day eating food that's as delicious as the Music and Art Academy cafeteria entrées. Catch Keith on Twitter at @KeefKnight.