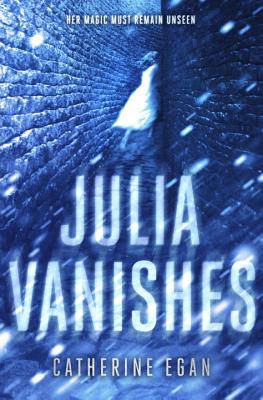 "An exciting novel with magic and serial killers.... One of the hottest books coming out."—Hypable.com

Fans of Marie Lu, Leigh Bardugo, and Kristin Cashore will be captivated by this stunning first book in a must-have new fantasy trilogy about a spy who can vanish at will and who discovers that monsters, mystery, and magic are also lurking—just out of sight.

Julia has the unusual ability to be . . . unseen. Not invisible, exactly. Just beyond most people's senses.

It's a dangerous trait in a city that has banned all forms of magic and drowns witches in public Cleansings. But it's a useful trait for a thief and a spy. And Julia has learned—crime pays.

She's being paid very well indeed to infiltrate the grand house of Mrs. Och and report back on the odd characters who live there and the suspicious dealings that take place behind locked doors.

But what Julia discovers shakes her to the core. She certainly never imagined that the traitor in the house would turn out to be . . . her.

Murder, thievery, witchcraft, betrayal--Catherine Egan builds a dangerous world where her fierce and flawed heroine finds that even a girl who can vanish can't walk away from her own worst deeds.

"The first book in the Witch's Child trilogy has adventure, murder, romance, intrigue, and betrayal with a 16-year-old heroine that is both fierce and flawed at the same time. Catherine Egan is an exciting new talent." —Hypable.com

"Readers will find themselves immediately immersed in the narrative and invested in the fate of Julia, who is both feisty and flawed. There is a richness to this inaugural volume of the Witch’s Child trilogy, and readers will be hard pressed to put it down." —Booklist starred review

"Julia's a wonderful, fully realized heroine with moral dilemmas aplenty. For those readers waiting for the sequel to Marie Lu's The Rose Society, a well-realized page-turner in the same vein." —Kirkus Reviews

"A fast-paced, deftly written fantasy with a complex and memorable protagonist. I can’t wait for the next installment!" —Juliet Marillier, author of Wildwood Dancing

"Julia's complexities fascinate. In the suspenseful, action-packed debut of the Witch's Child trilogy, Catherine Egan spins out a dark and deep world of magic and crime." —Shelf Awareness

"This is a great choice for true fantasy lovers. The worldbuilding is exceptionally done. A truly outstanding first book in what is sure to be a sought-after series."--VOYA

"Right from the start, it’s nearly impossible to put this book down. Equally difficult is pinning down its genre, as it has elements of fantasy, mystery, romance, action, and adventure—there’s even a search for a serial killer. Egan’s world-building is as richly realized as her characters. Julia’s home of Spira City, a world of ritual cleansings, witch drownings, and religious power struggles, resembles medieval Europe; Julia is feisty, fierce and believably flawed, and her many dilemmas and difficult moral choices add real depth to an already-suspenseful plot.  Happily, this is the first of a series, called The Witch’s Child, and there are more adventures to come." -- Lynn Rutan, The Booklist Reader

CATHERINE EGAN grew up in Vancouver, Canada. Since then, she has lived on a volcanic island in Japan (which erupted while she was there and sent her hurtling straight into the arms of her now-husband), in Tokyo, Kyoto, and Beijing, on an oil rig in the middle of Bohai Bay, then in New Jersey, and now in New Haven, Connecticut.

She is currently occupied with writing books and fighting dragon armies with her warrior children. You can read more about her at catherineegan.com and follow her on twitter @bycatherineegan.
Loading...
or
Not Currently Available for Direct Purchase