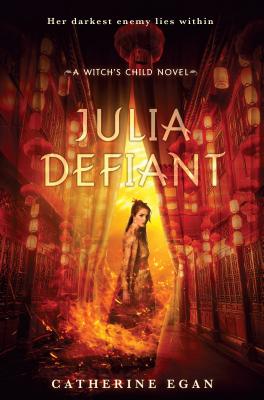 Fans of Graceling and Six of Crows will thrill to the masterful world-building and fiercely flawed heroine in this heart-pounding follow-up to Julia Vanishes, book two in the Witch’s Child trilogy.

“Adventure, murder, romance, intrigue, and betrayal with a 16-year-old heroine that is both fierce and flawed at the same time.” —Hypable.com

Julia and a mismatched band of revolutionaries, scholars, and thieves have crossed the world searching for a witch. But for all the miles traveled, they are no closer to undoing the terrible spell that bound an ancient magic to the life of a small child. The evil, immortal Casimir wants that magic and every moment they hunt for the witch, Ko Dan, Casimir’s assassins are hunting them.

Julia can deal with danger. The thing that truly scares her lies within. Her strange ability to vanish to a place just out of sight has grown: she can now disappear so completely that it’s like stepping into another world. It’s a fiery, hellish world, filled with creatures who seem to recognize her—and count her as one of their own.

So . . . is Julia a girl with a monster lurking inside her? Or a monster wearing the disguise of a girl?

If she can use her monstrous power to save Theo, does it matter?

In this riveting second book in the Witch’s Child trilogy, Catherine Egan goes deep within the heart of a fierce, defiant girl trying to discover not just who but what she truly is.

“Readers will find themselves immediately immersed in the narrative and invested in the fate of Julia, who is both feisty and flawed.” —Booklist, starred review

“Julia’s a wonderful, fully realized heroine. . . . For those readers waiting for the sequel to Marie Lu’s The Rose Society, a well-realized page-turner in the same vein.” —Kirkus

CATHERINE EGAN grew up in Vancouver, Canada. Since then, she has lived on a volcanic island in Japan (which erupted while she was there and sent her hurtling straight into the arms of her now husband), in Tokyo, Kyoto, and Beijing, on an oil rig in the middle of Bohai Bay, then in New Jersey, and now in New Haven, Connecticut.

She is currently occupied with writing books and fighting dragon armies with her warrior children. You can read more about her at catherineegan.com and follow her on Twitter at @ByCatherineEgan.
Loading...
or
Not Currently Available for Direct Purchase