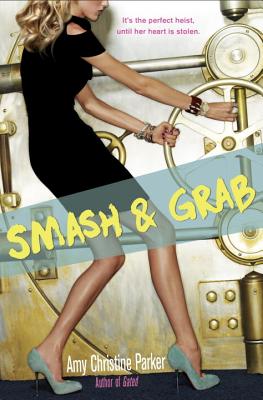 Ocean’s Eleven meets the star-crossed lovers of West Side Story. Grab some popcorn and get ready for an adrenaline-filled heist!

LEXI is a rich girl who loves a good rush. Whether it’s motorcycle racing or BASE jumping off a building in downtown Los Angeles, the only times she feels alive are when she and her friends are executing one of their dares. After her father’s arrest, Lexi doesn’t think twice about going undercover at his bank to steal the evidence that might clear his name. She enlists her hacker brother and her daredevil friends to plan a clever heist.

CHRISTIAN is a boy from the wrong side of the tracks. The local gang has blackmailed him and his friends into robbing banks, and he is desperate for a way out. When the boss promises that one really big job will be the last he ever has to do, Christian jumps at the chance for freedom. In fact, he’s just met a girl at the bank who might even prove useful. . . .

Two heists. One score. The only thing standing in their way is each other.

Told in alternating points of view, this caper is full of romance and fast-paced fun. Hand to fans of Perfect Chemistry, The Conspiracy of Us, and Heist Society.

AMY CHRISTINE PARKER is the author of Gated and Astray. She writes full-time from her home near Tampa, Florida, where she lives with her husband, their two daughters, and one ridiculously fat cat. Visit her at amychristineparker.com and follow her on Twitter at @amychristinepar.
Loading...
or
Not Currently Available for Direct Purchase