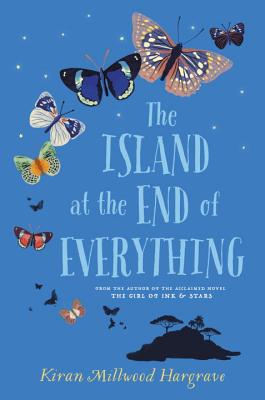 The Island at the End of Everything (Hardcover)

A poignant story filled with heart-warming courage as a young girl takes on a harrowing journey to be reunited with her mother.

Ami lives on Culion, an island in the Philippines for people who have leprosy. Her mother is among the infected. Ami loves her home: with its blue seas and lush forests, Culion contains all she knows and loves. But the arrival of malicious government official Mr. Zamora changes her world forever. Islanders untouched by sickness are forced to leave for a neighboring island, where the children are placed in an orphanage. Banished across the sea, Ami is desperate to return to Culion before her mother's death. She finds a strange and fragile hope in a colony of butterflies. Can they lead her home before it's too late? Heartrending yet hopeful, celebrated newcomer Kiran Hargrave's novel is a story about loss, perseverence, and faith.

Kiran Millwood Hargrave is a poet and novelist, currently studying on Oxford University's Creative Writing MA. She was born in London in 1990, and now lives in Oxford. Find her on Twitter @kiran_mh or kiranmillwoodhargrave.co.uk

Praise For The Island at the End of Everything…

"A heartbreaking and heartwarming must-read about love, loss, friendship, and determination in times of desperation."—Kirkus, starred review

"Hargrave tells an incredible story of compassion, love, and daring in this book’s pages, and her lyrical writing glides with the grace of a butterfly. "—Booklist, starred review

"Hargrave gives dignity to the colony’s legacy, showcasing the beauty of the island and the strength and love of the residents. "—VOYA, starred review
or
Buy Here
Copyright © 2020 American Booksellers Association