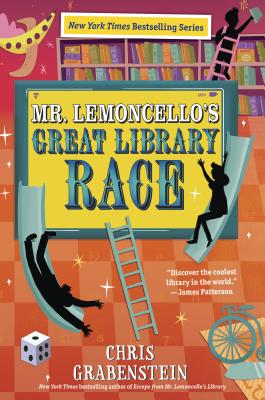 On your marks. Get set. Lemon, cello, GO!

Everyone’s favorite game maker, Mr. Lemoncello, is testing out his new FABULOUS FACT-FINDING FRENZY game! If Kyle can make it through the first round, he and the other lucky finalists will go on a great race—by bicycle, bookmobile, and even Mr. Lemoncello’s corporate banana jet!—to find fascinating facts about famous Americans. The first to bring their facts back to the library will win spectacular prizes! But when a few surprising “facts” surface about Mr. Lemoncello, it might be GO TO JAIL and LOSE A TURN all at once! Could Kyle’s hero be a fraud? It’s winner take all, so Kyle and the other kids will have to dig deep to find out the truth before the GAME is OVER for Mr. Lemoncello and his entire fantastic empire!

Filled with brand-new puzzles and games (including a hidden bonus puzzle!), this fast-paced read will have gamers and readers alike racing to the finish line because, like Mr. Lemoncello’s commercials say, IS IT FUN? . . . HELLO! IT’S A LEMONCELLO!

* “An ode to libraries and literature that is a worthy successor to the original madman puzzle-master himself, Willy Wonka.” —Booklist, Starred, on Escape from Mr. Lemoncello’s Library

“Just as much of an adventure as the first.” —The Washington Post, on Mr. Lemoncello’s Library Olympics

"Lots of action and quirky humor." —The Washington Post

CHRIS GRABENSTEIN is the New York Times bestselling author of the wildly popular Mr. Lemoncello series, the Welcome to Wonderland series, and many other books, as well as the coauthor of many page-turners with James Patterson, including the Max Einstein series; and also of Shine!, which he coauthored with his wife, J.J. Grabenstein. Chris lives in New York City. Visit Chris at ChrisGrabenstein.com and on Twitter at @CGrabenstein. Look for the latest Mr. Lemoncello books-Mr. Lemoncello's All-Star Breakout Game (available now!) and Mr. Lemoncello and the Titanium Ticket, coming in 2020!
Loading...
or support indie stores by buying on
(This book is on backorder)