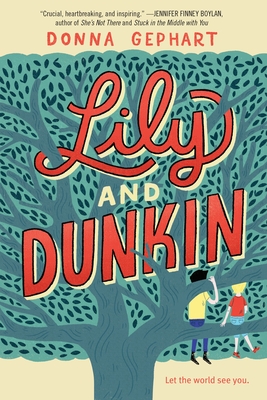 For readers who enjoyed Wonder and Counting by 7's, award-winning author Donna Gephart crafts a compelling story about two remarkable young people: Lily, a transgender girl, and Dunkin, a boy dealing with bipolar disorder. Their powerful journey, perfect for fans of Wonder, will shred your heart, then stitch it back together with kindness, humor, bravery, and love.

Lily Jo McGrother, born Timothy McGrother, is a girl. But being a girl is not so easy when you look like a boy. Especially when you’re in the eighth grade.

Dunkin Dorfman, birth name Norbert Dorfman, is dealing with bipolar disorder and has just moved from the New Jersey town he’s called home for the past thirteen years. This would be hard enough, but the fact that he is also hiding from a painful secret makes it even worse.

Praise For Lily and Dunkin…

"Gephart clearly has a lot of heart, and she tells their stories with compassion." —Kirkus

“Gephart sympathetically contrasts the physical awkwardness, uncertainty, and longings of these two outsiders during a few tightly-plotted months, building to a crescendo of revelation…[A] valuable portrait of two teenagers whose journeys are just beginning.” —PW

"Gephart has written a story that will speak not just to one specific community, but to humanity as a whole... This would be a fantastic addition to any middle grade library collection, and is highly recommended for all ages." —VOYA

"Lily and Dunkin is a delight. Here’s a book for anyone who’s ever struggled with being different--or anyone who’s ever loved someone who bears the burden of difference. . . . Crucial, heart-breaking, and inspiring.” —Jennifer Finney Boylan, author of She’s Not There and Stuck in the Middle with You

Donna Gephart’s award-winning novels are packed with humor and heart. They include Death by Toilet Paper; Olivia Bean, Trivia Queen; How to Survive Middle-School; and As if Being 12-3/4 Isn’t Bad Enough, My Mother Is Running for President! Donna is a popular speaker at schools, conferences, and book festivals. For reading guides, resources, writing tips, and more, visit donnagephart.com.

her at birth. Lily, born Tim, associates as a female and wants to start the hormone therapy that will allow

her to begin the physical transition to become a girl. When did Lily begin to think of herself as a girl?

Why is it best that she begin the hormone therapy now? Her mother and sister are very supportive, but

her father is not. Discuss why her father is resistant. How is Lily’s father finally convinced to support her

Throughout the book, members of Lily’s family and her close friend tell her how brave she is. How does

Bob? Why is the tree especially important to her as she takes bigger steps toward becoming Lily? What

is her ultimate act of bravery?

The proper medication can control his mood swings. Why does he think stopping the medication will

help him on the basketball court? Why does his mother suspect that he isn’t taking his medication?

Who is Phin? Why is Norbert’s mother so concerned when he talks to Phin?

Lily is one of the first people Norbert meets when he moves to Florida. Why does Lily nickname Norbert

“Dunkin”? Why is Lily so disappointed when Dunkin wants to sit with the basketball team at lunch?

bully her in the hallways.

Both characters are bullied because they don’t fit in with their classmates. Why are they hesitant to report

Discuss the enormous courage it takes for Lily and Dunkin to share their secrets.

rest of the novel? It won’t be an easy road for either of them. What are some of

the obstacles they are likely to face in the future?

How is this book about tolerance and understanding?