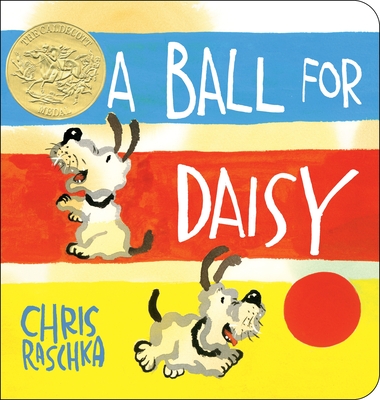 A Ball for Daisy

Winner of the 2012 Randolph Caldecott Medal

This New York Times Bestseller and New York Times Best Illustrated Book relates a story about love and loss as only Chris Rashcka can tell it. Any child who has ever had a beloved toy break will relate to Daisy's anguish when her favorite ball is destroyed by a bigger dog. In the tradition of his nearly wordless picture book Yo! Yes?, Caldecott Medalist Chris Raschka explores in pictures the joy and sadness that having a special toy can bring. Raschka's signature swirling, impressionistic illustrations and his affectionate story will particularly appeal to young dog lovers and teachers and parents who have children dealing with the loss of something special.

Praise For A Ball for Daisy: (Caldecott Medal Winner)…

Starred Review, Horn Book, September/October 2011:
"a story that is noteworthy for both its artistry and its child appeal."

CHRIS RASCHKA has written and/or illustrated over 30 books for children, including The Purple Balloon, called "deceptively simple and beautifully direct" by Kirkus Reviews. His other books include Good Sports, an ALA Notable Book; the 2006 Caldecott Medal winning title, The Hello, Goodbye Window; the Caldecott Honor Books Yo! Yes?; and Mysterious Thelonius.
Loading...
or support indie stores by buying on