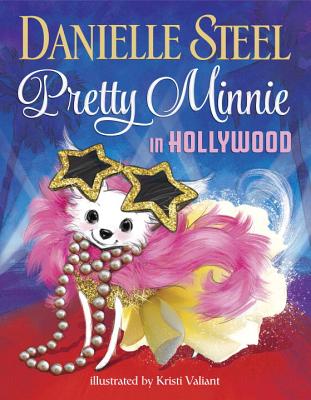 Lights, camera, adorable! Pretty Minnie is back, and it’s her big break when she visits the glitz and glamour of Hollywood! Whether sightseeing with her best friend, taking a dip in the fancy hotel pool, or having a costume fitting at the movie studio, Minnie’s star quality shines as she becomes everyone’s favorite motion-picture pup. This dazzling tale will have young readers shouting, “Hooray for Hollywood!”

“While Steele’s charm-filled plot features a stylish dog and her exciting journeys, it also zeroes in on the inseparable bond between a little girl and her precious pup. An endearing read for children with pets.”—Booklist

Praise for Pretty Minnie in Paris:

DANIELLE STEEL is one of the world’s most popular authors, with over 650 million copies of her novels in print. She is published in sixty-nine countries and forty-three languages. Ms. Steel also founded and runs two foundations: The Nick Traina Foundation, named in honor of her late son, which finances organizations that address mental illness and child abuse, and Yo! Angel!, which assists the homeless. In 2014, she was made a Chevalier de la Légion d'honneur, the highest honor bestowed by the French government. She is the mother of nine children and lives in Paris and San Francisco with her Chihuahuas, Minnie and Blue.