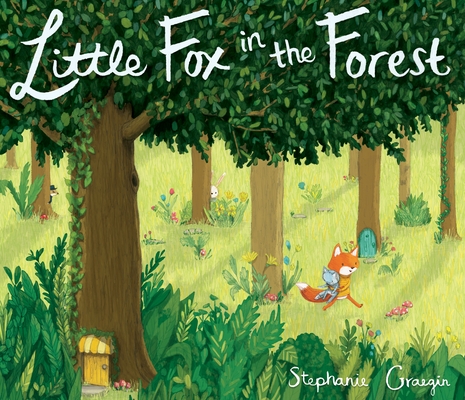 Little Fox in the Forest (Hardcover)

Fans of Aaron Becker’s Caldecott Honor winner Journey will love this utterly enchanting wordless picture book in which two friends follow a young fox deep into the woods and discover a wondrous and magical world.

When a young girl brings her beloved stuffed fox to the playground, much to her astonishment, a real fox takes off with it! The girl chases the fox into the woods with her friend, the boy, following close behind, but soon the two children lose track of the fox. Wandering deeper and deeper into the forest, they come across a tall hedge with an archway. What do they find on the other side? A marvelous village of miniature stone cottages, tiny treehouses, and, most extraordinary of all, woodland creatures of every shape and size. But where is the little fox? And how will they find him?

Stephanie Graegin’s oh-so-charming illustrations are simply irresistible, and readers young and old will want to pore over the pages of this delightful fantasy adventure again and again.

Stephanie Graegin received her BFA from the Maryland Institute College of Arts and her MFA in printmaking from the Pratt Institute. She is the illustrator of several books for children, including The Lost Gift by Kallie George; Water in the Park by Emily Jenkins, which received three starred reviews; Peace Is an Offering by Annette LeBox; and How to Share with a Bear by Eric Pinder. Little Fox in the Forest is her authorial debut. Stephanie lives in Brooklyn, New York. Visit her at graegin.com.

Praise For Little Fox in the Forest…

"Young children will pore over this wordless picture book again and again, finding something new to enjoy each time." — Kirkus, starred review

"This is a story not just to read but to inhabit." — Publishers Weekly, starred review

"...viewers can pick up skills in decoding visual narrative while also getting a chance to breathlessly root around in some serious cuteness. " — Bulletin, starred review
or
Buy Here
Copyright © 2020 American Booksellers Association