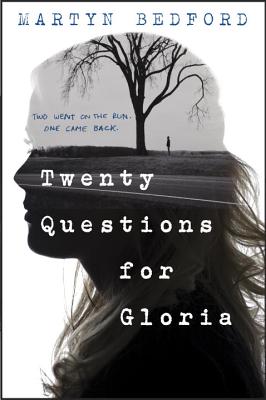 At 15, Gloria longs for adventure, something beyond her ordinary suburban life. When a mysterious new boy strolls into school, bent on breaking all the rules, Gloria is ready to fall under his spell.
Uman is funny, confident, and smart. He does what he wants without a care for what anyone thinks. The only people for him, he says, are the mad ones, the ones who never yawn or say a commonplace thing but burn, burn, burn.
He is everything Gloria wants to be. He can whisk her away and show her a more daring, more exciting life in which the only limits are the boundaries of her own boldness. But Uman is not all he seems. And by the time she learns the truth about him, she’s a long way from home . . . and the whole country wants to know: Where’s Gloria?
For fans of Dreamland by Sarah Dessen, Stolen by Lucy Christopher, and the Mara Dyer books by Michelle Hodkin.

Praise for Twenty Questions for Gloria
“The witty banter . . . will appeal to teens who love books with quirky dialogue and zingy one-liners, which also provide a refreshing and authentic counterpoint to the darker themes that run through the story. . . . For fans of Rainbow Rowell’s Eleanor & Park.”—SLJ

“Bedford’s (Never Ending, 2014) skillful writing and unusual format will draw in teens who identify with the urge to cast off the mundane and find their place in the world.”—Booklist

“Dropping clues with absolute control over the novel’s trajectory, Bedford builds tension from the initial interview to the surprising final scene.”—Horn Book

“Feels like it should be a Sherlock Holmes style novel and I mean that in the best way possible because it has that allure and mystery, and yet still keeps it humble with its quirky characters, romance-on-the-side . . . it’s an amazing novel to read.”—The Guardian, UK

“A gripping tale . . . should definitely be on your reading list.”—Escapades of a Bookworm (UK)

“An outstanding novel which poses big questions while immersing the reader in a fast-moving narrative.”—The School Librarian (UK)

Martyn Bedford’s first novel for young adults, Flip, won multiple awards in Britain and has been translated into eight languages. His second novel for young adults, Never Ending, was nominated for the Carnegie Medal. He has also written five novels for adults, including The Houdini Girl. A former journalist, he teaches creative writing at Leeds Trinity University. Martyn lives in West Yorkshire, England, with his wife and two daughters. Learn more about him at martynbedford.com.
Loading...
or
Not Currently Available for Direct Purchase