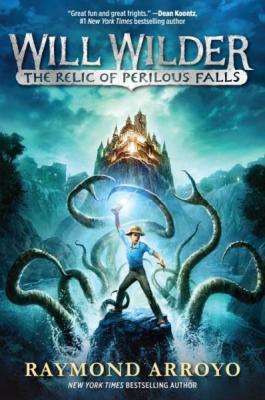 The Relic of Perilous Falls

Fans of Rick Riordan’s Percy Jackson and the Olympians and Peter Lerangis’s Seven Wonders series will embrace this epic adventure in a rollicking new series by a New York Times bestselling author.

Will Wilder didn’t mean to unlock his otherworldly gift. But that is exactly what happens when Will “borrows” a sacred relic believed to protect the town of Perilous Falls for nearly a century. Even though his intentions are good, the impulsive twelve-year-old unwittingly awakens an ancient evil endangering all of Perilous Falls.

As boats sink and hideous creatures crawl from the rising waters, it is up to Will to confront a nightmarish enemy and set things right before it is too late. Along with his sweet—if lethal—great-aunt Lucille, the curator of a museum of supernatural artifacts, Will proves that the actions of one twelve-year-old boy can change the world.

Raymond Arroyo is a New York Times bestselling author, the lead anchor and managing editor of EWTN News, and the host of The World Over Live. The story of Will Wilder grew out of Arroyo’s love of museums and fascination with relics. Will Wilder: The Relic of Perilous Falls is Arroyo’s first children’s book. The adventure continues with Will Wilder: The Lost Staff of Wonders in spring 2017. He lives in New Orleans with his wife and three children. You can follow Arroyo on Facebook and on Twitter at @RaymondArroyo.

Praise For Will Wilder #1: The Relic of Perilous Falls…

“[A]n action-packed story of pith helmets and secret passageways, prophecy and skepticism, temptation and wickedness, and the most agile and lethal great-aunt a boy could hope to have.”—The Wall Street Journal

“With shades of Indiana Jones and Percy Jackson, Will Wilder’s antics are sure to appeal to middle-grade readers looking for the next great adventure.” —Booklist

“Monsters! Prophecies! Ancient relics! This is a wildly inventive book, and Will Wilder is just the kind of hero you want when the small town of Perilous Falls turns out to be the most important place in the universe.” —Frank Cottrell Boyce, author of Millions and Cosmic
or
Not Currently Available for Direct Purchase
Copyright © 2020 American Booksellers Association