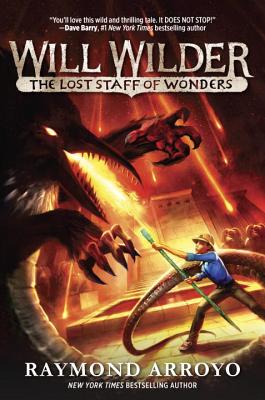 The Lost Staff of Wonders

“Open the cover, fasten your seat belt, and get ready for a rip-roaring ride!” —Ridley Pearson, author of the New York Times bestselling series Kingdom Keepers

Will Wilder is back to protect the town of Perilous Falls from another ancient evil—the fearsome demon, Amon, in this series that’s been described as having “shades of Indiana Jones and Percy Jackson” (Booklist).

When the storied Staff of Moses—responsible for summoning the plagues of ancient Egypt—vanishes from the museum in Perilous Falls, Will Wilder is suspect number one. Desperate to prove his innocence and stop the thief from unleashing terrors upon the town of Perilous Falls, Will must use his supernatural gift to locate the beast—but it’s nowhere to be found.

As the river runs with blood, sharp-toothed frogs surround his home, and clouds of swarming gnats choke the streets, Will must rely on his supernatural ability, everything he learned from his training, and help from his friends, siblings, and Great-Aunt Lucille to find the missing staff and unmask the hidden evil before time runs out for all of them.

“This new Will Wilder tale will have readers itching for adventures of their own.” —N. D. Wilson, author of the acclaimed 100 Cupboards series


Praise for Book 1 in the Will Wilder series, The Relic of Perilous Falls:
“You’ll love this wild and thrilling tale. It DOES NOT STOP!” —Dave Barry, #1 New York Times bestselling author

“[A]n action-packed story of pith helmets and secret passageways, prophecy and skepticism, temptation and wickedness, and the most agile and lethal great-aunt a boy could hope to have.” —The Wall Street Journal

Raymond Arroyo is a New York Times bestselling author, award-winning producer, and lead anchor and managing editor of EWTN News. As the host of The World Over Live, he is seen in nearly 300 million homes internationally each week. He is also founder of Storyented, a large-scale literacy initiative. When not in Perilous Falls, he can be found at home in New Orleans with his wife and three children. You can follow him on Facebook and on Twitter at @RaymondArroyo.

Praise For Will Wilder #2: The Lost Staff of Wonders…

“Surprising spiritual depth with a hearty helping of monsters and miracles.” —Kirkus Reviews

Praise for Book 1 in the Will Wilder series, The Relic of Perilous Falls:

“Monsters! Prophecies! Ancient relics! This is a wildly inventive book, and Will Wilder is just the kind of hero you want when the small town of Perilous Falls turns out to be the most important place in the universe.” —Frank Cottrell-Boyce, author of Millions and Cosmic
or
Not Currently Available for Direct Purchase
Copyright © 2020 American Booksellers Association