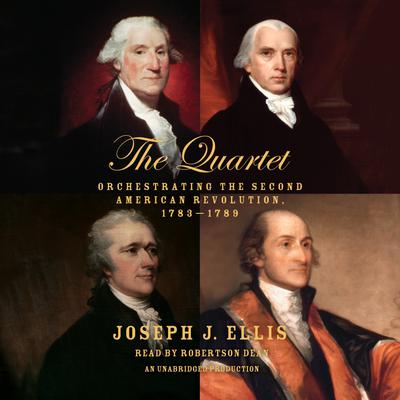 From Pulitzer Prize–winning American historian Joseph J. Ellis, the unexpected story of why the thirteen colonies, having just fought off the imposition of a distant centralized governing power, would decide to subordinate themselves anew.

We all know the famous opening phrase of Lincoln’s Gettysburg Address: “Four score and seven years ago our fathers brought forth on this Continent a new Nation.” The truth is different. In 1776, thirteen American colonies declared themselves independent states that only temporarily joined forces in order to defeat the British. Once victorious, they planned to go their separate ways. The triumph of the American Revolution was neither an ideological nor a political guarantee that the colonies would relinquish their independence and accept the creation of a federal government with power over their autonomy as states.

The Quartet is the story of this second American founding and of the men most responsible—George Washington, Alexander Hamilton, John Jay, and James Madison. These men, with the help of Robert Morris and Gouverneur Morris, shaped the contours of American history by diagnosing the systemic dysfunctions created by the Articles of Confederation, manipulating the political process to force the calling of the Constitutional Convention, conspiring to set the agenda in Philadelphia, orchestrating the debate in the state ratifying conventions, and, finally, drafting the Bill of Rights to assure state compliance with the constitutional settlement.

Ellis has given us a gripping and dramatic portrait of one of the most crucial and misconstrued periods in American history: the years between the end of the Revolution and the formation of the federal government. The Quartet unmasks a myth, and in its place presents an even more compelling truth—one that lies at the heart of understanding the creation of the United States of America.

JOSEPH J. ELLIS is the Pulitzer Prize–winning author of Founding Brothers. His portrait of Thomas Jefferson, American Sphinx, won the National Book Award. He lives in Amherst, Massachusetts, with his wife, Ellen, his youngest son, three dogs, and a cat.