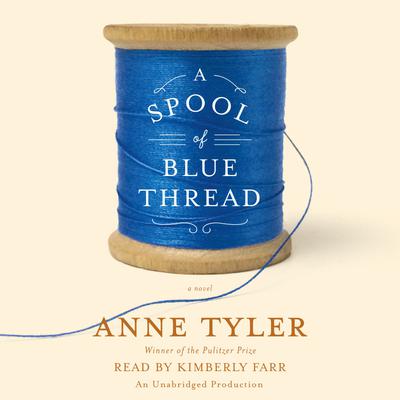 “Tyler's story of three generations of the Whitshank family has all the hallmarks for which she is so well known. There is drama, dysfunction, and sorrow aplenty here, but Tyler has an amazing way of exposing family life in both its ugly and beautiful glory. These characters love each other, except when they don't, and every interaction is crackling with Tyler's quirky and unassuming wit. A Spool of Blue Thread shows how lives intersect -- very rarely neatly -- and how that messiness gives meaning to every human connection. Tyler is a master of her craft -- this being her 20th novel -- and she is a treasure to read.”
— Dinah Hughley, Powell's Books, Inc, Portland, OR
View the List

Short-listed for the Man Booker Prize

“It was a beautiful, breezy, yellow-and-green afternoon. . .” This is how Abby Whitshank always begins the story of how she fell in love with Red that day in July 1959. The Whitshanks are one of those families that radiate togetherness: an indefinable, enviable kind of specialness. But they are also like all families, in that the stories they tell themselves reveal only part of the picture. Abby and Red and their four grown children have accumulated not only tender moments, laughter, and celebrations, but also jealousies, disappointments, and carefully guarded secrets. From Red’s father and mother, newly arrived in Baltimore in the 1920s, to Abby and Red’s grandchildren carrying the family legacy boisterously into the twenty-first century, here are four generations of Whitshanks, their lives unfolding in and around the sprawling, lovingly worn Baltimore house that has always been their anchor.

Brimming with all the insight, humor, and generosity of spirit that are the hallmarks of Anne Tyler’s work, A Spool of Blue Thread tells a poignant yet unsentimental story in praise of family in all its emotional complexity. It is a novel to cherish.

ANNE TYLER was born in Minneapolis, Minnesota, in 1941 and grew up in Raleigh, North Carolina. This is her twentieth novel; her eleventh, Breathing Lessons, was awarded the Pulitzer Prize in 1988. She is a member of the American Academy of Arts and Letters. She lives in Baltimore, Maryland.