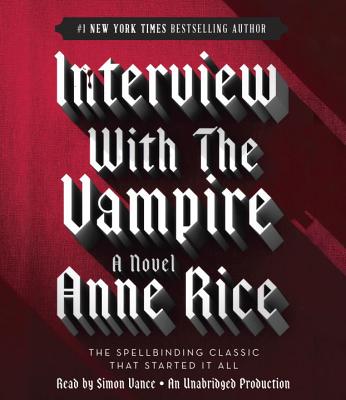 Praise For Interview with the Vampire…

Anne Rice was born in New Orleans in 1941. She is the author of many bestselling novels, including the widely successful Vampire Chronicles. Her first novel, Interview with the Vampire, was made into a film in 1994 starring Tom Cruise and Brad Pitt. Her other books include the Mayfair Witches series, the novels The Mummy or Ramses the Damned, Violin, Angel Time, the Sleeping Beauty trilogy, and, most recently, the Wolf Gift Chronicles series. Anne lives and works in Southern California.

Simon Vance is a stage, TV, and film actor who has narrated more than 200 audiobooks for which he has won multiple AudioFile Earphone Awards and Audie nominations. He has also been selected as an AudioFile Golden Voice. Formerly a BBC Radio newsreader in London, he now resides in Northern California.
Loading...
or
Not Currently Available for Direct Purchase