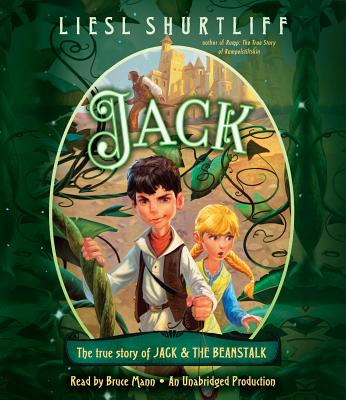 Fairy tale fans will give a GIANT cheer for this funny retelling of Jack and the Beanstalk from the New York Times Bestselling author of Rump and Red!

All his life, Jack has longed for an adventure, so when giants turn up in the neighbor's cabbage patch, he is thrilled! Soon Jack is chasing them to a land beyond the clouds, with his little sister, Annabella, in tow. The kingdom of giants is full of super-sized fun: puddings to swim in, spoons to use as catapults, monster toads to carry off pesky little sisters. . . .
But Jack and Annabella are on a mission. The king of the giants has taken something that belongs to them, and they’ll do anything—even dive into a smelly tureen of green bean soup—to get it back.

“Liesl Shurtliff has the uncanny ability to make magical worlds feel utterly real, and the best part is: you don’t even need a beanstalk to visit them.” —Tim Federle, author of Better Nate than Ever

"A delightful story of family, perseverance, and courage." —Booklist

Praise For Jack: The True Story of Jack and the Beanstalk…

"Liesl Shurtliff has the uncanny ability to make magical worlds feel utterly real, and the best part is: you don't even need a beanstalk to visit them." —Tim Federle, author of Better Nate Than Ever

"Shurtliff’s second fairy-tale endeavor, following Rump (2013), soars into the sky and is a delightful story of family, perseverance, and courage." —Booklist

"With a healthy dose of honor and integrity to accompany his wisecracking ways, Jack is a winning hero, and his adventures—both unexpected and recognizable—will please those readers with rollicking spirits or a yen for tales retold." —The Bulletin

Liesl Shurtliff was born and raised in Salt Lake City, Utah. Just like Jack, she was made to do lots of yard work, pulling weeds and growing green stuff she did not want to eat. Now she lives with her family in Chicago, where it is very hard to grow things in her elf-sized yard. She dearly loves the local farmers’ market and always makes her kids eat the green stuff.
Before she became a writer, Liesl graduated from Brigham Young University with a degree in music, dance, and theater. Her first book, Rump: The True Story of Rumpelstiltskin, won over kids and critics alike, earning an IRA Award, a Texas Bluebonnet nomination, a Whitney nomination, and a starred review from Kirkus, proclaiming it “as good as gold.” Her next book will be a fractured retelling of “Little Red Riding Hood.”
Loading...
or
Not Currently Available for Direct Purchase