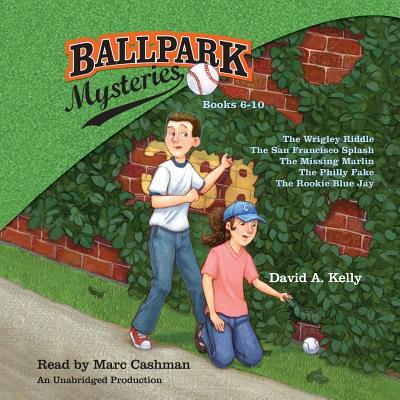 Ballpark Mysteries #6: The Wrigley Riddle
Ivy-covered walls—they're the most famous part of the Chicago Cubs' historic ballpark, Wrigley Field. Mike and Kate can't wait to get down on the field to see the ivy for themselves. But when they do, they're horrified to discover patches of the ivy have been ripped away! Who would want to sabotage the stadium? Is it someone trying to curse the Cubs? Or is the rumor of a treasure hidden under the ivy tempting greedy fans?

Ballpark Mysteries #7: The San Francisco Splash
Splash! A hit soars over the walls of the San Francisco ballpark on the bay and drops into the water. But then Mike and Kate hear another, much larger splash nearby . . . and this time it's not a baseball. It's a man overboard! And when he's pulled from the water, the old-time ballplayer discovers his World Series ring is gone! Is it at the bottom of the bay? Or was it somehow stolen by a long-ago rival?

Ballpark Mysteries #8: The Missing Marlin
Mike and Kate are in Miami visiting Kate's Uncle Oliver—and the Miami Marlins ballpark, of course! Uncle Oliver is in charge of keeping the new fish tanks at the ballpark fully stocked, but strange things keep happening. Kate swears she saw an endangered sea turtle in one of the tanks. Then some of Uncle Oliver's rare fish go missing, including his favorite, Marlin. Something fishy is going on in Miami!

Ballpark Mysteries #9: The Philly Fake
What better city to spend the Fourth of July than Philadelphia? For Mike and Kate, the holiday is all about hot dogs, history, and baseball! But the Phillies are in no mood to celebrate. They keep losing, and some people blame the lovable Phillie Phanatic! Can Mike and Kate help the Phanatic clear his name?

Ballpark Mysteries #10: The Rookie Blue Jay
Mike and Kate can’t wait to watch their rookie hero Dusty Martin in action. But something is throwing the Blue Jays’ star off his game. Then, when no one else is looking, Mike sees mysterious ghost lights flying across the field. Is the ballpark haunted? And could Dusty have seen the lights, too?

DAVID A. KELLY has written for many newspapers and magazines, and Babe Ruth and the Baseball Curse, published in spring 2009, was his first book for children. He lives fifteen minutes from Fenway Park in Newton, Massachusetts.
Loading...
or
Not Currently Available for Direct Purchase