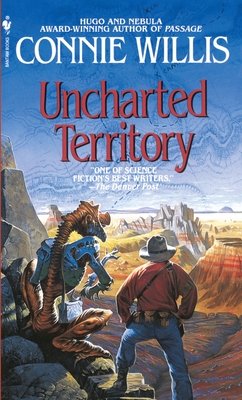 Findriddy and Carson are two explorers sent to Boohte to survey the ridges and scrub-covered hills of the planet. Back home, their adventures are followed by countless breathless fans, but the reality is far less romantic as they deal with dust, nitpicking regulations, and uncooperative aliens. Teamed with a young intern whose specialty is mating customs, and a native guide of indeterminate gender, the group sets out for a previously unexplored sector of the planet. As they survey canyons and cataracts, battle dangers, and discover alien treasures, they will soon find themselves in alien territory of another kind: exploring the paths and precipices of sex. And love.

Praise For Uncharted Territory: A Novel…

Connie Willis is a member of the Science Fiction Hall of Fame and a Grand Master of the Science Fiction and Fantasy Writers of America. She has received seven Nebula awards and eleven Hugo awards for her fiction; Blackout and All Clear—a novel in two parts—and Doomsday Book won both. Her other works include Passage, Lincoln’s Dreams, Bellwether, Impossible Things, Remake, Uncharted Territory, To Say Nothing of the Dog, Fire Watch, and Miracle and Other Christmas Stories. Connie Willis lives in Colorado with her family, where she deals with the delights (and the more maddening aspects) of our modern oh-so-connected world on a daily basis.
Loading...
or
Not Currently Available for Direct Purchase