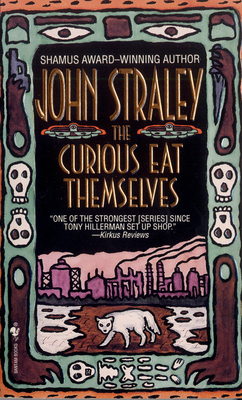 The Curious Eat Themselves

Welcome to Sitka, Alaska, a land of breathtaking vistas and beautiful fauna, where locals are trying their best to be good—and to survive—in what may be the last vestige of the Wild West.

When local woman Louise Root asks private detective Cecil Younger to investigate her rape at the Otter Creek gold mine, he agrees. After all, Louise is a close friend of his ex. Maybe helping her out could improve Hannah’s opinion of him. But before Cecil can make progress on the case, he witnesses Alaska state troopers fishing her body out of the ocean—not exactly the resolution he had in mind.

Despite the unfortunate end his last client met, Cecil finds himself inundated with requests from all sides: his old friend, Officer Doggy, wants help controlling the grieving Hannah; Cecil’s autistic roommate, Todd needs help finding his Labrador retriever; and the sleazy executives of Global Mining want dirt on a local environmental activist—a request even the bungling PI finds suspicious. But Cecil also feels a responsibility to discover the truth behind Louise’s death. If Louise knew a secret that got her killed, Cecil needs to discover and expose the truth before he, too, is permanently silenced.

John Straley lives in Sitka, Alaska, with his wife, a marine biologist who studies whales. He is the Shamus Award–winning author of The Angels Will Not Care, The Woman Who Married a Bear, The Curious Eat Themselves, The Music of What Happens, and Death and the Language of Happiness.
Loading...
or
Not Currently Available for Direct Purchase