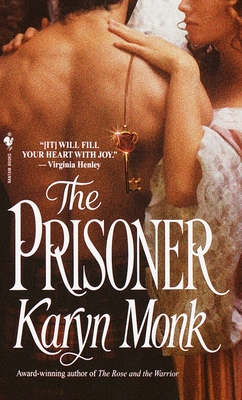 Filled with charm and humor, The Prisoner is Karyn Monk's passionate new romance of a proud Scottish nobleman, an unconventional beauty, and a love that defies all odds.

He was a fugitive from justice...

Once a powerful laird, now a convicted murderer, Haydon Kent, Marquess of Redmond, had no hope of eluding the hangman's noose — until a mysterious beauty appeared in the dark shadows of his cell.

Escaping in the dead of night, he sought only to reclaim his life and prove his innocence. Instead he finds himself imprisoned once again — by an exquisite woman with red-gold hair who soothes his fevered body and tormented soul ... and stirs in him a passion unlike any he has ever known.

...until she imprisoned his heart.

An outcast from society, Genevieve MacPhail has devoted her life to rescuing wayward urchins from the brutalities of a corrupt prison system. Harboring an infamous escaped murderer will only imperil the beloved children who have become the center of her world. But she doesn't believe the disarmingly handsome nobleman is a cold-blooded killer — even if he does harbor a painful secret.

Determined to solve the mystery of who was trying to kill him, Genevieve will assume the role of Haydon's wife, only to find herself succumbing to a dangerous desire that could destroy them both.

Praise For The Prisoner (Orphan #1)…

"[It] will fill your heart with joy."
-- Virginia Henley