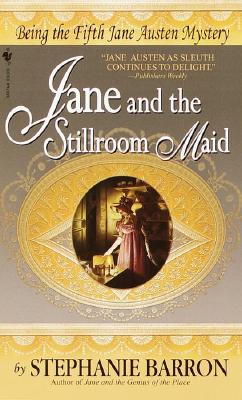 Jane and the Stillroom Maid

Jane Austen is enjoying August, 1806, among Derbyshire's craggy peaks, sparkling streams, and cavernous gorges. That is, until she discovers the corpse of a young gentleman whose blond curls and delicate features suggest the face of an angel.

More shocking still is the coroner's revelation: the deceased is no man but a maidservant — clad in the garb of her master, Mr. Charles Danforth of Penfolds Hall. Tess Arnold had ruled the stillroom at Penfolds for many years — until she was labeled a witch and dismissed for indiscretion. Was Tess the prey of a madman loose in the hills, or perchance the cast-off impediment to a gentleman's marriage?

As usual, Jane's acute perception and her nose for trouble place her supremely at risk — from a killer who may strike as violently by day as he once did by night....

"This fifth Jane Austen detection gets ... my Best in Series vote."—Booknews from The Poisoned Pen

"Another first-rate addition to the series."—Christian Science Monitor

"Barron does a wonderful job of evoking the great British estates and the woes of spinsters living in that era ... often echoing the rhythms of the Austen novels with uncanny ease."—Entertainment Weekly