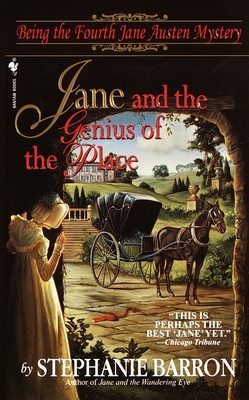 Jane and the Genius of the Place

For everyone who loves Jane Austen...The fourth engaging mystery in the series that recasts the well-loved author as a sleuth!

In the waning days of summer, Jane Austen is off to the Canterbury Races, where the rich and fashionable gamble away their fortunes. It is an atmosphere ripe for scandal—but even Jane is unprepared for the shocking drama that unfolds. A flamboyant French beauty, known for her brazen behavior, is found gruesomely strangled in a shabby chaise. While many urge the arrest of a known scoundrel with eyes for the victim, Jane looks further afield and finds a number of acquaintances behaving oddly.

As rumors spread like wildfire that Napoleon's fleet is bound for Kent, Jane suspects that the murder was an act of war rather than a crime of passion. Suddenly the peaceful fields of Kent are a very dangerous place...and Jane's thirst for justice may exact the steepest price of all—her life.

"Barron does a wonderful job of evoking the great British estates and the woes of spinsters living in that era... often echoing the rhythms of the Austen novels with uncanny ease."—Entertainment Weekly

"Jane [is] a subtle but determined sleuth."—Chicago Tribune

"This is perhaps the best 'Jane' yet."—Chicago Tribune