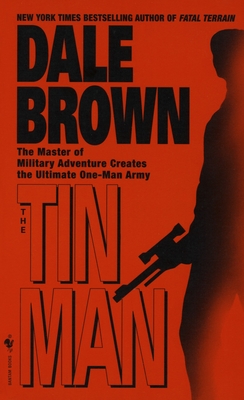 The master of military adventure creates the ultimate one-man army....

New York Times bestselling author Dale Brown pits men and technology against impossible odds, in vividly realized stories. Now, in his eleventh novel, he brings aerial combat hero Patrick McLanahan out of retirement and plunges him into the most personal war he's ever fought.

His old enemy Gregory Townsend has come to America to ignite a reign of terror that will sweep across the nation. The police and the government seem powerless to stop him. And one of the first casualties in this war is a rookie cop--McLanahan's brother.

McLanahan has plenty of experience in war. And so does arms expert Jon Masters. Using Masters's deadliest weapon yet, McLanahan becomes a one-man army, known on the streets as the Tin Man. But this time, technology is a double-edged sword--and his war of revenge may destroy McLanahan himself... and everything he stands for.

"Dale Brown has the techno-thriller genre down cold....Brown finely etches all the details [and] the plot's tightly bolted together."
--USA Today

"It's a page-turning start to a fresh new direction for both Brown and McLanahan."
--Publishers Weekly (starred review)

"A popular example of the techno-thriller form...A solid shoot-'em-up, with some clever technical apparatus that makes this read a bit like sf."
--Booklist

Dale Brown is a former captain in the U.S. Air Force. He lives in Nevada, where he can often be found high in the sky, piloting his own plane. He is the author of ten previous novels, all of them New York Times bestsellers.
Loading...
or
Not Currently Available for Direct Purchase