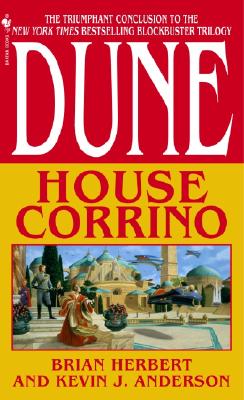 The triumphant conclusion to the blockbuster trilogy that made science fiction history!

Here nobles and commoners, soldiers and slaves, wives and courtesans shape the amazing destiny of a tumultuous universe. An epic saga of love and war, crime and politics, religion and revolution, this magnificent novel is a fitting conclusion to a great science fiction trilogy ... and an invaluable addition to the thrilling world of Frank Herbert’s immortal Dune.

Fearful of losing his precarious hold on the Golden Lion Throne, Shaddam IV, Emperor of a Million Worlds, has devised a radical scheme to develop an alternative to melange, the addictive spice that binds the Imperium together and that can be found only on the desert world of Dune.

In subterranean labs on the machine planet Ix, cruel Tleilaxu overlords use slaves and prisoners as part of a horrific plan to manufacture a synthetic form of melange known as amal. If amal can supplant the spice from Dune, it will give Shaddam what he seeks: absolute power.

But Duke Leto Atreides, grief-stricken yet unbowed by the tragic death of his son Victor, determined to restore the honor and prestige of his House, has his own plans for Ix.

He will free the Ixians from their oppressive conquerors and restore his friend Prince Rhombur, injured scion of the disgraced House Vernius, to his rightful place as Ixian ruler. It is a bold and risky venture, for House Atreides has limited military resources and many ruthless enemies, including the sadistic Baron Harkonnen, despotic master of Dune.

Meanwhile, Duke Leto’s consort, the beautiful Lady Jessica, obeying the orders of her superiors in the Bene Gesserit Sisterhood, has conceived a child that the Sisterhood intends to be the penultimate step in the creation of an all-powerful being. Yet what the Sisterhood doesn’t know is that the child Jessica is carrying is not the girl they are expecting, but a boy.

Jessica’s act of disobedience is an act of love — her attempt to provide her Duke with a male heir to House Atreides — but an act that, when discovered, could kill both mother and baby.

Like the Bene Gesserit, Shaddam Corrino is also concerned with making a plan for the future — securing his legacy. Blinded by his need for power, the Emperor will launch a plot against Dune, the only natural source of true spice. If he succeeds, his madness will result in a cataclysmic tragedy not even he foresees: the end of space travel, the Imperium, and civilization itself.

With Duke Leto and other renegades and revolutionaries fighting to stem the tide of darkness that threatens to engulf their universe, the stage is set for a showdown unlike any seen before.

“Each action lays another stone in the remarkable construct of the world of Dune.”—Booklist

“The second ‘Dune’ series is proving to be more accessible and just as entertaining as the original.”—Oregonian

Brian Herbert is the son of legendary science fiction author Frank Herbert and has written the definitive biography of him, Dreamer of Dune, a finalist for the Hugo Award. He has also written many highly imaginative novels, including The Timeweb Chronicles, the ecological fantasy Ocean (with his wife, Jan), The Little Green Book of Chairman Rahma, The Unborn, and The Assassination of Billy Jeeling. His earlier acclaimed novels include The Stolen Gospels, Sudanna, Sudanna, and Sidney’s Comet, as well as Man of Two Worlds (written with his father). Brian Herbert also co-manages the legacy of Frank Herbert and is an executive producer of the new motion picture Dune and the forthcoming TV series Dune: The Sisterhood. He and his wife live in Seattle, Washington.

Kevin J. Anderson has written in many genres: science fiction, epic fantasy, suspense/thriller, and humor. He is best known for his work in the Star Wars, X-Files, Batman, and Superman universes, as well as the space opera The Saga of Seven Suns; the epic fantasy Spine of the Dragon; his humorous Dan Shamble, Zombie P.I. series; and two steampunk fantasy adventures, Clockwork Angels and Clockwork Lives, written with legendary Rush drummer and lyricist Neil Peart. Anderson is creative consultant on the new Legendary motion picture of Dune and is co-producer of the forthcoming TV series Dune: The Sisterhood. He is the publisher of WordFire Press and also professor and director of the publishing MA program at Western Colorado University.

Together, Herbert and Anderson have written numerous international bestselling novels set in the universe of Frank Herbert’s Dune, as well as the definitive graphic novel adaptation of the classic Dune. They are the authors of an original epic science fiction trilogy, Hellhole, Hellhole Awakening, and Hellhole Inferno.
Loading...
or
Not Currently Available for Direct Purchase