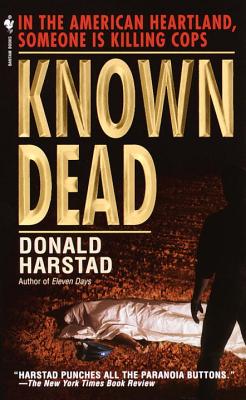 In the American heartland, someone is killing cops.

The ambush exploded in an Iowa marijuana field. The weapons were high caliber. The pot was high grade. And the reporters said afterward: "We have two known dead...."

Deputy Sheriff Carl Houseman knew the dead all right: One was a small-time doper, the other a good cop. But Houseman doesn't know why they died, or who cut them down in a blaze of automatic rifle fire. Now, as the Feds descend on Nation County, Houseman and his fellow cops are suddenly walking point--searching for answers amidst the violence, treachery, and evil in their own backyard....

Donald Harstad's Eleven Days was called "a hell of a first novel" by Michael Connelly and "truly frightening" by the San Francisco Chronicle. In his electrifying new novel Harstad captures with nerve-shattering power an Iowa police department's harrowing search through a killing storm--to know the truth about the dead and the living alike....

"Instantly propels him into the top ranks of mystery writers."
--Booklist

"A complicated little conundrum of a plot that keeps Houseman, the Feds, and the reader guessing all the way through....An author who knows his territory."
--The New York Times

"Harstad...advances the scary (and perversely entertaining) notion that people are just as cuckoo in the heartland as they are in the wicked city."
--The New York Times Book Review

And coming soon in hardcover from Doubleday:
The Big Thaw

Donald Harstad is a twenty-six-year veteran of the Clayton County Sheriff's Department in northeastern Iowa, and the author of the acclaimed Eleven Days. A former deputy sheriff, Harstad lives with his wife, Mary, in Elkader, Iowa.
or
Not Currently Available for Direct Purchase