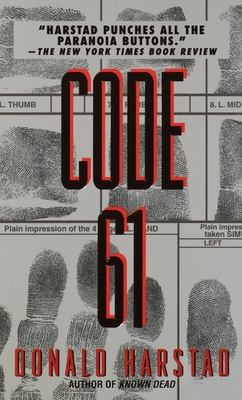 CODE 61: maintain radio silence. someone may be listening.

Investigating the apparent suicide of a colleague’s niece, Iowa Deputy Sheriff Carl Houseman is startled to uncover a group that transforms the dark fantasies of vampire legend into grisly reality: they ritualistically drink small amounts of one another’s blood. As Carl is drawn deeper into this unnerving world, it becomes clear that the dead woman may have been the victim of a twenty-first-century Dracula.

The prime suspect, Dan Peale, is a sinister presence within the group--a man some say drinks blood and never, ever dies. It’s an outlandish, heinous theory, but then suspicions are bolstered by rumors of a card-carrying vampire hunter who is also pursuing Peale. All too soon, Houseman finds himself scrambling to track a vampire--before he kills again.

“Another engrossing entry in one of the best new police procedural series.”
--Publishers Weekly (starred review)

Donald Harstad is a 26-year veteran of the Clayton County Sheriff's Department in northeastern Iowa, and the author of the acclaimed novels Eleven Days and Known Dead. A former deputy sheriff, he lives with his wife, Mary, in Elkader, Iowa.
Loading...
or
Not Currently Available for Direct Purchase