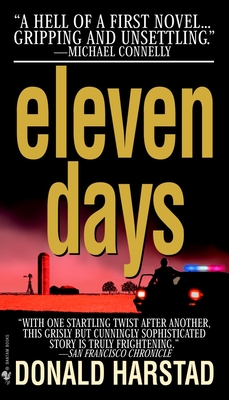 Life in Maitland, Iowa, is usually predictable, even for a cop. But all that changes the day Deputy Sheriff Carl Houseman's dispatcher receives the terrifying 911 call. The day cops find the mutilated bodies at a remote farmhouse. The first of eleven days Carl will never forget.

As hotshot investigators fly in from New York, Carl and his fellow cops use old-fashioned detective work to piece together clues. But to turn suspicions into suspects, Carl must search among his closest friends to find a killer who has shocked and bewildered cops who'd thought they'd seen it all. And before it's over, Carl will be forced into an unrelenting spiral of chaos, coming face-to-face with evil he never dreamed could exist in Maitland...or anywhere else.

"A hell of a first novel... Gripping and unsettling."
--Michael Connelly

"With one startling twist after another, this grisly but cunningly sophisticated story is truly frightening."
--San Francisco Chronicle


"Harstad...advances the scary (and perversely entertaining) notion that people are just as cuckoo in the heartland as they are in the wicked city."
--The New York Times Book Review

Donald Harstad is a twenty-six-year veteran of the Clayton County Sheriff's Department in northeastern Iowa.  A former deputy sheriff, Harstad lives with his wife, Mary, in Elkader, Iowa.  Eleven Days is his first novel.
or
Not Currently Available for Direct Purchase