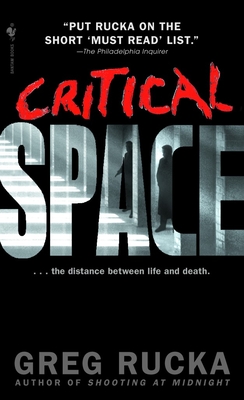 The acclaimed author of Shooting at Midnight has penned a thriller like no other ... the no-holds-barred story of a bodyguard with the ultimate assignment: protecting a woman who also happens to be the most hunted killer in the world...

Code-named Drama, she is a lightning-fast death machine — a hitwoman sought by intelligence agencies around the world. Drama kills as easily as she breathes ... and the last time she and Atticus Kodiak met, they barely escaped each other alive.

Atticus Kodiak has a reputation as one of the toughest bodyguards in the business. He’s used to picking his assignments and calling the shots. But all that changes when he is forced to take on Drama as a client — the last person he ever imagined would need his protection.

This time, Drama is the one who is running from a killer. She needs Atticus’s help, and she won’t take no for an answer. To prove it, she abducts a high-profile member of the royal family whom Atticus has sworn to protect. He will do almost anything to get the woman back. But what Drama needs from him will destroy his reputation — and siding with her means he can never turn back.

From New York’s Russian enclaves to the Swiss Alps and the Caribbean, Atticus becomes Drama’s protector, and her only hope for survival as she tries to outlive and outrun her bloody past. But once immersed in Drama’s high-stakes, covert world, Atticus breaks a cardinal rule: He gets to know Drama as a woman rather than just a client — and it’s a bond that could cost them both their lives.

For the men hunting Drama are capable of unspeakable violence — of sins that make Drama’s own look like the acts of an amateur. And they will stop at nothing to see her dead....

A masterful work by one of the most unique voices in the field, Critical Space combines high-voltage, high-tech action with swift, terrifying brutality. The result is Greg Rucka’s most explosive thriller to date — a powerhouse of a novel destined to become a classic of modern suspense.

“A skillfully orchestrated cat-and-mouse game during which cat and mouse have a most entertaining way of switching roles.... Deftly plotted, elegantly written: might just be the thriller of the year.”—Kirkus Reviews, starred review

“[T]he pace is good and the plot compelling. Best of all, Rucka’s protagonists are well-rounded and sympathetic, convincingly resourceful and refreshingly low-key. Solidarity and friendship are as important as weaponry and tactics in this satisfying, character-driven thriller.”—Publishers Weekly

“Put Rucka on the short ‘must read’ list.”—Philadelphia Inquirer

Born in San Francisco, Greg Rucka was raised on the Monterey Peninsula. He is the author of Private Wars, A Gentleman’s Game, and six previous thrillers, as well as numerous comic books, including the Eisner Award—winning Whiteout: Melt. He lives in Portland, Oregon, with his family.
Loading...
or
Not Currently Available for Direct Purchase