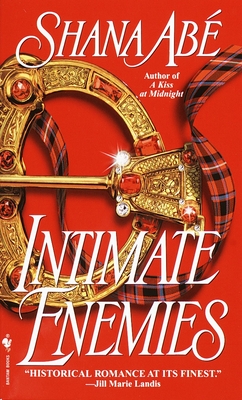 From Shana Abé, author of The Truelove Bride and A Kiss at Midnight, comes this exquisitely emotional, beautifully written novel about two warring clans on a Scottish isle united by a fragile pact... and the hearts of two unforgettable lovers.

Lauren MacRae is only a woman. But her father's death has left her the leader of the Clan MacRae. Now it is up to her to defend her beloved Isle of Shot from the invading Northmen, even if it means going to her clan's sworn enemy, the powerful English overlord, Arion du Morgan, for help. But Arion's raven hair, green eyes, and smoldering sensuality soon make Lauren forget just why she turned to him—as he awakens within her a wayward desire....

Like Lauren, Arion risks the mutiny of his soldiers by forming this risky alliance. But he was brought up to believe that the Isle of Shot belongs not to the Clan MacRae, but to England—and he will defend it to his dying breath. Once, when they were children, Arion saved Lauren from a tortuous fate. Now, the copper-haired beauty has somehow found a way to banish the emptiness in his soul. And as they join forces to fight for the land they both love, he will risk everything—even his very life—to claim what is his.

Praise For Intimate Enemies: A Novel…

Shana Abé is the author of Queen of Dragons, The Dream Thief, and The Smoke Thief. She lives in Denver, Colorado.
Loading...
or support indie stores by buying on