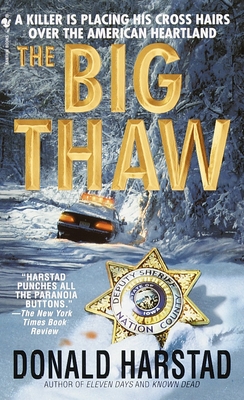 A killer is placing his cross hairs over the American heartland....

The pair of frozen corpses were found under a tarp in the machine shed of an empty farmhouse. Two males -- brothers -- both killed by bullets from a Russian automatic fired at close range. The cops have a suspect: a man Deputy Sheriff Carl Houseman busted five years earlier and the county's lead suspect in a series of recent robberies.

Houseman knows they have the wrong guy. He also knows they've got something bigger than a burglary gone bad ... especially when the FBI starts showing up in Maitland. The brutal double homicide is just the tip of the iceberg in a case where a killer's trail keeps disappearing like footprints in freshly fallen snow, and where one bad break can send a good cop into a deep freeze.

"Harstad gets better and better with each book."
-- Library Journal

"Escape the urban thriller to the heartland with Harstad, a real rising star."
-- Booknews from The Poisoned Pen

"Plenty of laughs, skewed violence, and marvelous takes on how weird Iowa winters can be -- in the third, and best, procedural featuring easygoing Nation County Deputy Sheriff Carl Houseman, from a former Iowa deputy sheriff who knows the territory inside out."
-- Kirkus Reviews

Donald Harstad is a twenty-six-year veteran of the Clayton County Sheriff's Department in northeastern Iowa, and the author of the acclaimed novels Eleven Days and Known Dead. A former deputy sheriff, Harstad lives with his wife, Mary, in Elkader, Iowa.
Loading...
or
Not Currently Available for Direct Purchase