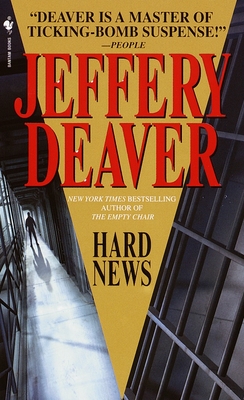 Rune is an aspiring filmmaker with more ambition than political savvy, paying her dues as an assistant cameraperson for the local news. But she's got her eyes on the prize, the network's hot newsmagazine, Current Events—and she's got the story she knows will get her there.

Poking around in the video archives, Rune spots a taped interview with Randy Boggs, who's doing hard time in Attica for a murder he claims he didn't commit. Rune can't say exactly why, but she's sure he's innocent. If she can prove it, Current Events won't merely report the news, it'll make news—and Rune's career.

But what she could be writing is Randy Boggs's epitaph—and her own. Rune's newly discovered witness soon turns up dead. A hit man from Miami is on Rune's trail, and Boggs is finding prison even more dangerous than before. Someone wants this story killed, and it could be the girl with the camera who ends up on the cutting room floor.

"Provides an excellent feel for the TV news industry. The plot twists are truly surprising. Totally recommended."
-- The Drood Review of Mystery

"Deaver is a master of ticking-bomb suspense!"
-- People

"Deaver will immobilize you with his deviousness!"
-- Rocky Mountain News

"Rune is a breath of fresh air."
-- Booklist

Death of a Blue Movie Star
"Innovative and entertaining...truly an original."
-- The Drood Review of Mystery