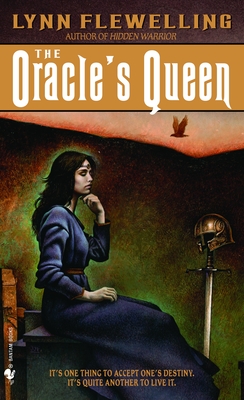 Under the rule of a usurper king, the realm of Skala has suffered famine, plague, and invasion. But now the time for the rightful heir has come, a return to the tradition of warrior queens. And the Lightbearer’s prophecy is to be upheld at last: so long as a daughter of the royal line defends and rules, Skala will never be subjugated.

Now a mystical fire has burned away the male body known as Prince Tobin, revealing Princess Tamír, a girl on the verge of womanhood–and a queen ready to claim her birthright after a life in disguise under the protection of wizards and witches. But will her people, her army–and the friends she was forced to deceive–accept her? Worse, will the crown’s rival heir, friend to Tobin, turn foe to Tamír, igniting civil war in a fierce battle for Skala?

Lynn Flewelling was born in Presque Isle, Maine, which—contrary to common assumption—is not an island. She received her undergraduate from the University of Maine at Presque Isle, where she majored in English, minored in History, and received a teaching certificate she had no intention of ever using. Since then, she has studied literature, veterinary medicine, ancient Greek among other things, and worked as a necropsy technician, a house painter, an office worker, a freelance editor, a freelance journalist (www.sff.net/people/Lynn.Flewelling/OtherWritings.html), and yes, even as a teacher now and then, an instructor of workshops—on creativity and fiction writing.
Loading...
or
Not Currently Available for Direct Purchase