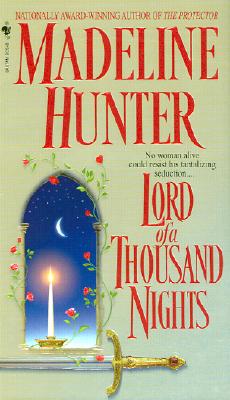 Lord of a Thousand Nights (Medievals #5)

No woman alive could resist his tantalizing seduction....

Celebrated as “one of the brightest new writers in the genre” (Publishers Weekly), Madeline Hunter has won the hearts of readers with the poignant passion of her love stories and the brilliance of her writing. Now this nationally bestselling, award-winning author delivers her freshest, most tantalizing romance yet...

Called the Lord of a Thousand Nights, Ian of Guilford was famed as much for his feats in the bedroom as on the battlefield. But Lady Reyna Graham had no idea of this when, disguised as a courtesan, she passed behind enemy lines with a desperate plan to save her people.

Now, sitting in the tent of the dizzyingly handsome warrior who commanded the army outside her gates, the beautiful widow suddenly realized that she had underestimated her foe.

For she found herself in the company of a man whose charms were said to be impossible to resist...and who would show no mercy in laying siege to her heart—and body—with every sensual weapon in his arsenal.

For the sake of her people, she must not give in ... and she must somehow turn this legendary lover who never lost his heart into a man who would exchange all his thousand nights for one with her....

Praise For Lord of a Thousand Nights (Medievals #5)…

Madeline Hunter is a nationally bestselling author of historical romances who lives in Pennsylvania with her husband and two sons. In a parallel existence to the one she enjoys as a novelist, she has a Ph.D. in art history and teaches at an East Coast university.
or
Not Currently Available for Direct Purchase