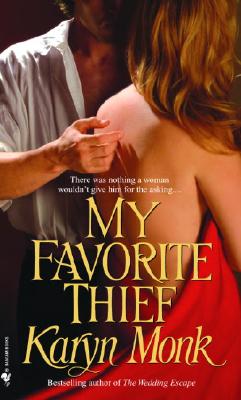 The last thing he expected was to steal her heart…

She should have been terrified, but Charlotte surprised even herself when she found herself helping a masked jewel thief. Now, after impulsively escaping in a waiting carriage, she finds herself alone with a dangerously seductive stranger whose identity remains a mystery that could steal not only her heart–but her life.

…Unless it was she'd steal his.

The robbery was a disaster but the danger was real, and the last thing Harrison Payne, earl of Bryden, planned was to be saved by a willowy, unconventional beauty. Already captivated by her courage and sensuality, Harrison is equally intrigued by her clumsy attempt to blackmail him. But Charlotte is hiding a past–and a secret–as dangerous as his own. And as an enemy seeks to destroy them both, they will abandon themselves to the passionate destiny that has drawn them together...and a chance at a love worth risking everything for.

Karyn Monk has been writing since she was a little girl. In university she discovered a love for history. After several years working in the highly charged world of advertising, she turned to writing historical romance. She is married with two children.
Loading...
or
Not Currently Available for Direct Purchase