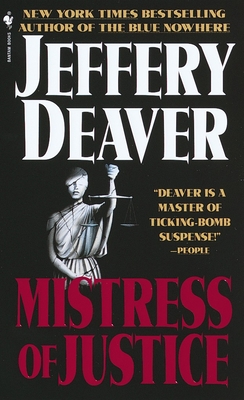 From the bestselling author of the Bone Collector novels, soon to be an NBC series • “Loaded with character and action and a very devious plot, Mistress of Justice is a top-notch legal thriller.”—Mystery Lovers News

Taylor Lockwood spends her days working as a paralegal in one of New York’s preeminent Wall Street law firms and her nights playing jazz piano anyplace she can. But the rhythm of her life is disrupted when attorney Mitchell Reece requests her help in locating a stolen document that could cost him not only the multimillion-dollar case he’s defending but his career as well. Eager to get closer to this handsome, brilliant, and very private man, Taylor signs on . . . only to find that as she delves deeper and deeper into what goes on behind closed doors at Hubbard, White & Willis, she uncovers more than she wants to kno—including a plentitude of secrets damaging enough to smash careers and dangerous enough to push someone to commit murder. Yet who is capable of going to that extreme? With her life on the line, Taylor is about to learn the lethal answer. . . .

“The characters are well drawn, the plot is fast paced, and the writing avoids totally the usual trappings of blockbusterdom. . . . An intelligently written thriller.”—Booklist

Praise For Mistress of Justice: A Novel…

“Loaded with character and action and a very devious plot, Mistress of Justice is a top-notch legal thriller.”—Mystery Lovers News

“The characters are well drawn, the plot is fast paced, and the writing avoids totally the usual trappings of blockbusterdom. . . . An intelligently written thriller.” —Booklist

“This novel is a solid achievement.” —Mystery News