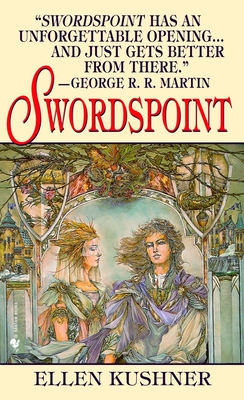 “Swordspoint has an unforgettable opening and just gets better from there.”—George R. R. Martin

On the treacherous streets of Riverside, a man lives and dies by the sword. Even the nobles on the Hill turn to duels to settle their disputes. Within this elite, dangerous world, Richard St. Vier is the undisputed master, as skilled as he is ruthless—until a death by the sword is met with outrage instead of awe, and the city discovers that the line between hero and villain can be altered in the blink of an eye.

“[Kushner] draws you through the story with such lucid, powerful writing that you come to trust her completely--and she doesn’t let you down...Watch this woman--she’s going to be one of the great ones.”
--Orson Scott Card

"There is an element of high romance to Kushner’s work, but it is honed to a bleeding edge by a deep appreciation of what motivates men and women. These are fantasies for adults, with the pang of real love and loss in them, sometimes surprisingly violent, sometimes breathtakingly tender, and sometimes very passionate indeed." --Realms of Fantasy

Ellen Kushner’s Riverside series begins with the cult classic Swordspoint, followed by the Locus Award winner and Nebula Award nominee The Privilege of the Sword; The Fall of the Kings, written with Delia Sherman; and, most recently, the collaborative prequel Tremontaine. Her mythic fantasy novel Thomas the Rhymer won the World Fantasy Award and the Mythopoeic Award. She also co-edited Welcome to Bordertown with Holly Black.

A popular performer and public speaker, Kushner created and hosted the long-running public radio show Sound & Spirit, which Bill Moyers called “the best thing on public radio.” She has taught creative writing at the Clarion and Odyssey writing workshops and is an instructor at Hollins University’s children’s literature MFA program. She lives in New York City with Delia Sherman and no cats whatsoever, in an apartment full of theater and airplane ticket stubs.
Loading...
or support indie stores by buying on
(This book is on backorder)