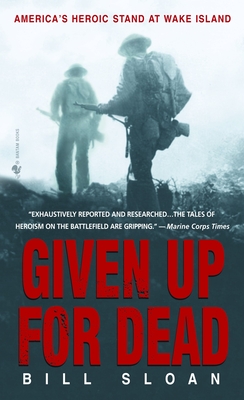 Given Up for Dead (Mass Market)

A gripping narrative of unprecedented valor and personal courage, here is the story of the first American battle of World War II: the battle for Wake Island. Based on firsthand accounts from long-lost survivors who have emerged to tell about it, this stirring tale of the “Alamo of the Pacific” will reverberate for generations to come.

On December 8, 1941, just five hours after the bombing of Pearl Harbor, Japanese planes attacked a remote U.S. outpost in the westernmost reaches of the Pacific. It was the beginning of an incredible sixteen-day fight for Wake Island, a tiny but strategically valuable dot in the ocean. Unprepared for the stunning assault, the small battalion was dangerously outnumbered and outgunned. But they compensated with a surplus of bravery and perseverance, waging an extraordinary battle against all odds.

When it was over, a few hundred American Marines, sailors, and soldiers, along with a small army of heroic civilian laborers, had repulsed enemy forces several thousand strong––but it was still not enough. Among the Marines was twenty-year-old PFC Wiley Sloman. By Christmas Day, he lay semiconscious in the sand, struck by enemy fire. Another day would pass before he was found—stripped of his rifle and his uniform. Shocked to realize he hadn’t awakened to victory, Sloman wondered: Had he been given up for dead—and had the Marines simply given up?

In this riveting account, veteran journalist Bill Sloan re-creates this history-making battle, the crushing surrender, and the stories of the uncommonly gutsy men who fought it. From the civilians who served as gunmen, medics, and even preachers, to the daily grind of life on an isolated island—literally at the ends of the earth—to the agony of POW camps, here we meet our heroes and confront the enemy face-to-face, bayonet to bayonet.

Bill Sloan is a Pulitzer Prize nominated freelance journalist and the author of a dozen books. During his ten years as an investigative reporter/feature writer for the Dallas Times Herald, Sloan covered many of the major events and personalities of the twentieth century.

Praise For Given Up for Dead: America's Heroic Stand at Wake Island…

“A thoroughly researched, cleanly written blend of history, narrative, and professional insight that cannot help but move you.”—James Webb, author of Fields of Fire and The Emperor’s General

“Given Up for Dead is the riveting account of a small garrison of Marines, sailors, and civilian workers who handed the Japanese their first defear of World War II in the Pacific. It is poignant, solidly researched, and told with brilliance and sensitivity. My hope is that this book will serve as a lasting tribute to a remarkable and heroic group of men.”—General P. X. Kelley, USMC (Ret.), 28th Commandant of the Marine Corps

"Drawing on the memories of a rapidly dwindling number of American (and a couple of Japanese) veterans ... [Given Up For Dead is] a blood and guts tale from the early days of WWII."—Kirkus Reviews

“Highly readable...exhaustively reported and researched, moves at a pace that screams.”—Marine Corps Times

"Given Up for Dead is a welcome find…. It is the 15 days of siege forming the core of the book that most readers are quite likely to remember most vividly…. By producing a nuanced account instead of a jingoistic, gung-ho glorification of a distant battle in a long-ago war, Sloan has added a valuable book to World War II literature."—Milwaukee Journal Sentinel

"Given Up for Dead is especially effective in telling the story of the individuals caught up in the battle…. A dramatic recounting of those desperate days of December 1941 when a small island and the courage of its few defenders momentarily held the attention of a proud and grateful country. "—Dallas Morning News
or
Not Currently Available for Direct Purchase
Copyright © 2020 American Booksellers Association