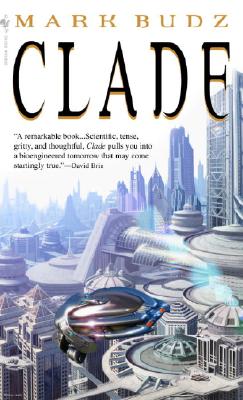 IT’S A POST-ECOCAUST WORLD.
WELCOME TO IT.

In the San Jose of tomorrow, all of nature is gengineered—from the warm-blooded plants to the designer people. But even in a rigidly controlled biosystem, with its pheromone-induced social order, the American dream is still the American dream. Caught between these new-old worlds, Rigo is on his way up—he’s going to be part of tomorrow, even if it means he has to leave today behind.

Written off as a sellout on the streets of his old ’hood, Rigo’s got his own ap in an aplex, a 9-to-5er, and a girl. He’s got opportunity. If he works hard, his job with a heavyweight
politicorp could give him a chance to move up in the clades. But when he’s chosen as part of a team to construct a new colony on a nearby comet, Rigo smells a setup. And when disaster strikes, he learns that if there’s a way to bend the rules, there’s also a way to break them…

Praise For Clade: A Novel…

"Smart, well-written, and highly imaginitive, Clade does for cutting edge biology what Neuromancer did for cyber future. Budz may welll have created a new genre: biopunk."—Kevin J. Anderson

"A remarkable book.... Scientific, tense, gritty, and thoughtful, Clade pulls you into a bioengineered tomorrow that may come startlingly true."—David Brin

Mark Budz lives in northern California with his wife, fellow author Marina Fitch. His short stories have appeared in Amazing Stories and The Magazine of Fantasy and Science Fiction. He is the author of four novels, Clade, Crache, Idolon, and, most recently, Till Human Voices Wake Us.
Loading...
or
Not Currently Available for Direct Purchase