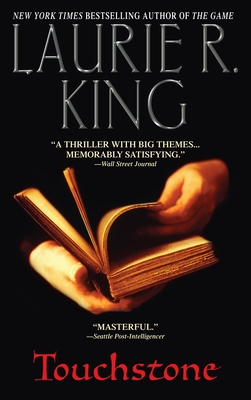 New York Times bestselling author Laurie R. King takes us to a remote cottage in Cornwall in this gripping tale of intrigue, terrorism, and explosive passions that begins with a visit to a recluse code-named . . .

Once studied by British intelligence for his excruciating sensitivity to the world’s turmoil, Bennett Grey has withdrawn from the world–until an American Bureau of Investigation agent comes to assess Grey’s potential as a weapon in a new kind of warfare.

Agent Harris Stuyvesant needs Grey’s help to enter a realm where the rich and the radical exist side by side–a heady mix of power, celebrity, and sexuality that conceals the free world’s deadliest enemy. Soon Stuyvesant finds himself dangerously seduced by one woman and–even more dangerously–falling in love with another. As he sifts through secrets divulged and kept, he uncovers the target of a horrifying conspiracy, and wonders if he can trust anyone, even his touchstone.

“This suspense novel unfolds slowly, but King is so adept at telling a story that the pace never lags. …. an entertaining mix of ambition, intrigue, social unrest and unfettered idealism.”—Arizona Republic

“Intelligent and nuanced . . . Indelible characters . . . a plot as tight as a drum. What more could you want?” –Seattle Times