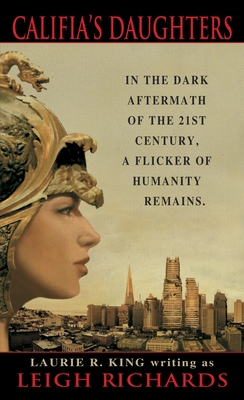 Set in the near future and inspired by the captivating myth of the warrior queen Califia, this brilliantly inventive novel tells the story of a small, peaceful community of women tucked away in a world gone mad.

Only the elders of the Valley remember life the way it used to be…when people traveled in automobiles and bought food others had grown. When the male-to-female ratio was nearly the same. Before the bombs fell, and a deadly virus claimed the world’s men.

Now civilization’s few surviving males are guarded by women warriors like Dian. When an unexpected convoy of strangers rides into her village, it is Dian who meets them, ready to do battle.

To her surprise, the visitors come in peace and bear a priceless gift, whose arrival is greeted with as much suspicion as delight. It is up to Dian to discover their motive, in a journey that will cost her far more than she ever imagined, a journey from which she may never return.

Leigh Richards is a pseudonym for a best-selling, award-winning author Laurie King.

Laurie R. King won the Edgar and John Creasey Awards for Best First Novel for A Grave Talent. She is the author of six acclaimed mysteries in the Mary Russell series, the most recent being Justice Hall, a Top Ten Booksense Mystery 76 pick and the Book Best Crime Novel of 2002, as well as four novels in a contemporary series featuring police detective Kate Martinelli. Proving her versatility, she is also the author of the critically acclaimed stand-alone novels of suspense: Keeping Watch (which was recently optioned by CBS), Folly, and A Darker Place.
or
Not Currently Available for Direct Purchase
Copyright © 2020 American Booksellers Association