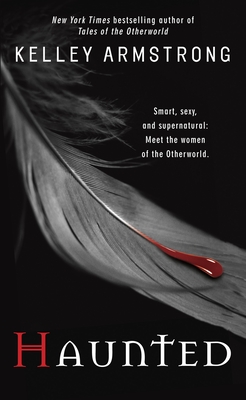 Haunted (The Women of the Otherworld Series #5)

THE CONTINUING ADVENTURES OF THE SMART, SEXY — SUPERNATURAL — WOMEN OF THE OTHERWORLD

Eve Levine — half-demon, black witch and devoted mother — has been dead for three years. She has a great house, an interesting love life and can’t be killed again — which comes in handy when you’ve made as many enemies as Eve. Yes, the afterlife isn’t too bad — all she needs to do is find a way to communicate with her daughter, Savannah, and she’ll be happy.

But fate — or more exactly, the Fates — have other plans. Eve owes them a favor, and they’ve just called it in. An evil spirit called the Nix has escaped from hell. She feeds on chaos and death, and is very good at persuading people to kill for her. The Fates want Eve to hunt her down before she does any more damage, but the Nix is a dangerous enemy — previous hunters have been driven insane in the process. As if that’s not problem enough, the only way to stop her is with an angel’s sword. And Eve is no angel. . . .

Praise For Haunted (The Women of the Otherworld Series #5)…

"Those who appreciate heroines with a good measure of spunk, sass and strong-arm savvy will find this a fun if fitful read."
— Publishers Weekly

"Mesmerizing . . . the 'other-worldly' atmosphere conjured up by Armstrong begins to seem strangely real. Armstrong is a talented and original writer whose inventiveness and sense of the bizarre is arresting."
— The London Free Press