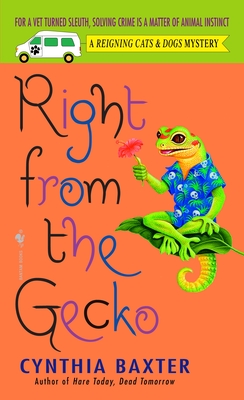 Right from the Gecko (Reigning Cats and Dogs Mystery #5)

Surf’s up . . . and so are the stakes when veterinarian and amateur sleuth Jessica Popper escapes to the land of hula, hibiscus, and geckos for a professional conference. The last time she and boyfriend Nick Burby touched down on the island of Hawaii, Nick caused a volcanic eruption when he unexpectedly popped The Question to commitment-phobic Jess. But this trip proves just as dangerous when Jess befriends an ambitious young reporter whose body later washes up on the sand . . . and someone thinks Jess holds the clue to the killer’s motive.

There’s no end of suspects among the exotic flora and fauna, from the victim’s journalistic rivals and a mystery boyfriend to an eccentric beachcomber and a governor’s aide with ties to a controversial biotech firm bringing progress to paradise. One of them is a killer with the chameleon-like ability to stay hidden—and if Jessica doesn’t uncover hula-dunnit in time, she’ll be saying aloha . . . permanently.

Cynthia Baxter is a native of Long Island, New York. She is the author of the Reigning Cats & Dogs mystery series, featuring vet-turned-sleuth Jessie Popper, and the Murder Packs a Suitcase mystery series, featuring travel writer Mallory Marlowe. Baxter currently resides on the North Shore, where she is at work on her next mysteries in both series.
Loading...
or
Not Currently Available for Direct Purchase