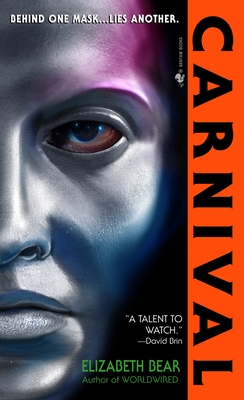 In Old Earth’s clandestine world of ambassador-spies, Michelangelo Kusanagi-Jones and Vincent Katherinessen were once a starring team. But ever since a disastrous mission, they have been living separate lives in a universe dominated by a ruthless Coalition—one that is about to reunite them.

The pair are dispatched to New Amazonia as diplomatic agents Allegedly, they are to return priceless art. Covertly, they seek to tap its energy supply. But in reality, one has his mind set on treason. And among the extraordinary women of New Amazonia, in a season of festival, betrayal, and disguise, he will find a new ally—and a force beyond any that humans have known. . . .

She is the recipient of the John W. Campbell Award for best New Writer and the author of over a dozen published or forthcoming novels, including the Locus Award-winning Jenny Casey trilogy and the Phillip K. Dick Award-nominated Carnival. A native New Englander, she spent seven years near Las Vegas, but now lives in Connecticut with a presumptuous cat.
Loading...
or support indie stores by buying on