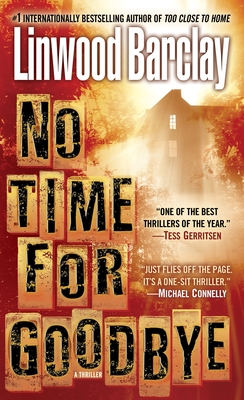 No Time for Goodbye (Mass Market)

Fourteen-year-old Cynthia Bigge woke one morning to discover that her entire family–mother, father,brother–had vanished. No note, no trace, no return. Ever.  Now, twenty-five years later, she’ll learn the devastating truth.

Cynthia is happily married with a young daughter, a new family. But the story of her old family isn’t over. A strange car in the neighborhood, untraceable phone calls, ominous “gifts”–someone has returned to her hometown to finish what was started twenty-five years ago. And no one’s innocence is guaranteed, not even her own. By the time Cynthia discovers her killer’s shocking identity, it will again be too late . . . even for goodbye.

Linwood Barclay is a former columnist for the Toronto Star. He is the #1 internationally bestselling author of many critically acclaimed novels, including The Accident, Never Look Away, Fear the Worst, Too Close to Home, and No Time for Goodbye. Multiple titles have been optioned for film.

Praise For No Time for Goodbye: A Thriller…

"No Time for Goodbye just flies off the page. It's a one-sit thriller. You sit down with this book and you won't get up until you've turned the last page."—Michael Connelly

"No Time for Goodbye is a high-speed emotional roller-coaster. The surprises will leave you breathless."—Robert Crais

"A terrific page-turner that keeps you in suspense until the very end. If you like Harlan Coben, you'll love Linwood Barclay."—Peter Robinson, author of Piece of My Heart

"No Time for Goodbye begins as an intriguing mystery then shifts with a sinister grace into a race-against-time thriller that begs to be read in a single sitting. Barclay sets his dark tale in the most familiar of surroundings, a decent, loving family, on the verge of being torn apart by tragic events 25 years old. The author’s unique voice finds terror in the most mundane of environments, an ordinary home, and thereby makes his shocking and original tale all the more compelling."—David Hewson, author of The Lizard's Bite

"No Time for Goodbye is a turbo-charged, nonstop thriller that got me with every twist and turn. Linwood Barclay has written a mesmerizing, addictive page-turner that I just couldn’ t put down. It’s one of the best suspense novels I’ve read in years."—Joseph Finder

"No Time for Goodbye is a great suburban thriller—and that's not a contradiction in terms. Linwood Barclay doesn't make one false step, and the surprises just keep on coming. Don't start reading No Time for Goodbye late at night: you'll stay up to finish it."—Charlaine Harris

"No Time for Goodbye is a deliciously smart thriller, full of surprises and perfect pacing. I'm jealous I didn't write it."—Alafair Burke, author of Dead Connection

"No Time for Goodbye is one of the best thrillers of the year! Utterly riveting, it will grab you on page one and won't let you go until the final, stunning conclusion."—Tess Gerritsen, New York Times bestselling author of The Bone Garden