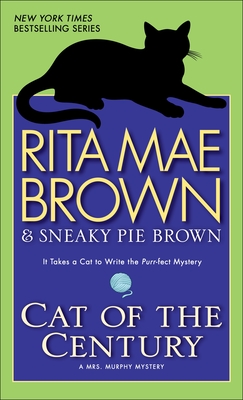 Cat of the Century

Mary Minor “Harry” Haristeen’s beloved, tart-tongued neighbor Aunt Tally is about to turn the big 1-0-0, and the alumnae association of Tally’s alma mater is throwing a big fund-raising bash in her honor. The plan is to celebrate Tally’s centennial and recoup some much-needed school revenue lost in the cratered economy, but when a killer blizzard bears down and a board member goes missing, it falls to Harry and her menagerie of mystery solvers to track down the truth behind what is rapidly becoming a perfect storm of embezzlement, political corruption, and the kind of long-smoldering enmity that can explode into murder. Does the key lie in a forty-year-old unsolved death? If so, Harry and her four-legged friends better find it or—even at a hundred years old—Aunt Tally may outlive them all.

Praise For Cat of the Century: A Mrs. Murphy Mystery…

“Reading a Mrs. Murphy mystery is like eating a potato chip. You always go back for more. . . . A deserving bestselling series.”—The Midwest Book Review

“[Rita Mae Brown’s] animals are as witty as ever.”—Kirkus Reviews

Sneaky Pie Brown, a tiger cat born somewhere in Albemarle County, Virginia, was discovered by Rita Mae Brown at her local SPCA. They have collaborated on numerous Mrs. Murphy mysteries—in addition to Sneaky Pie’s Cookbook for Mystery Lovers and Sneaky Pie for President.
Loading...
or
Not Currently Available for Direct Purchase