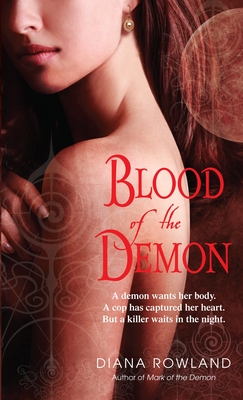 Blood of the Demon (Kara Gillian #2)

BETWEEN HEAVEN AND HELL, MAN AND DEMON, SHE’S ABOUT TO FACE THE ONE THING SHE MAY NOT BE ABLE TO SURVIVE.

Welcome to the world of Kara Gillian, a cop with a gift. Not only does she have the power of “othersight” to see what most people can’t even imagine, but she’s become the exclusive summoner of a demon lord. Or maybe it’s the other way around. The fact is, with two troublesome cases on her docket and a handsome FBI agent under her skin, Kara needs the help of sexy, insatiable Lord Rhyzkahl more than he needs her. Because these two victims, linked by suspicious coincidence, haven’t just been murdered. Something has eaten their souls.

It’s a case with roots in the arcane, but whose evil has flowered among the rich, powerful, and corrupt in Beaulac, Louisiana. And as the killings continue, Kara soon realizes how much there’s still to learn about demons, men, and things that kill in the night—and how little time she has to learn it.

Diana Rowland has lived her entire life below the Mason-Dixon Line. She has worked as a bartender, a blackjack dealer, a pit boss, a street cop, a detective, a computer forensics specialist, a crime-scene investigator, and a morgue assistant, which means that she’s seen more than her share of what humans can do to one another and themselves. She won the marksmanship award in her police academy class, earned a black belt in hapkido, has handled numerous dead bodies in various states of decomposition, and can’t Rollerblade to save her life. She lives with her husband and daughter in south Louisiana.
Loading...
or support indie stores by buying on